Proposed Land Swap Between TRG and the State of Michigan

The KATV Club has been fortunate enough to work with TRG(GMO) and TRG
Representative, Eric Stier. The KA TV Club started years ago with an idea of an ATV
trail system to connect the lower peninsula to the upper peninsula patterning after the
snowmobile trail system. TRG’s representative Eric Stier willing worked with the ATV
Club, to work out the problems that an A TV trail creates for TRG. we were successful in
accomplishing this amazing trail system in Northern Keweenaw County with combined
efforts of TRG, DNR and the KATV Club.

There were two articles recently written in the Daily Mining Gazette regarding a land
swap/trade in Northern Keweenaw County. One article was on August 21, 2018
showing a Keweenaw map color coding TRG and the State of Michigan owned
properties involved in the land swap. This property will include portions of our
ATV/Snowmobile existing trails. This land swap would insure a permanent trail system
without fear of losing it to private entities. We as Keweenaw County residents have
seen the loss of sections of trails access before. We have often heard people in
Keweenaw and Houghton Counties talking about what can be done to help keep our
trail system in existence. Here is our opportunity to make this land swap/trade happen
with letters of support.

Using a Mining Gazette quote from TRG Representative, Eric Stier, “It is a concern of
liability.” People are using the (Keweenaw) Point, and we know they are.” he said. And
can you keep people off of there? No. So that discussion goes on. It’s heavily used
property, so I’d rather it be in state ownership.”

All trail clubs; The KATV Club, The Snowmobile Club and more recently The Copper
Harbor Trails Club have developed unique trails on the Keweenaw Peninsula with great
efforts and volunteer time. A good percentage of these trials are on the proposed land
swap/trade.

We have been given a unique opportunity. We urge all land users to voice yourselfs on
this land swap/trade. This is our chance to make a difference with insuring our trail
existence. 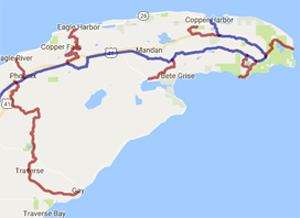 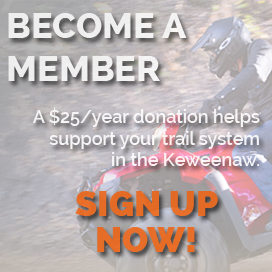